"Sure, sometimes we need to make sacrifices, but many times we make stupid sacrifices that rob us of the activities that recharge our internal batteries." 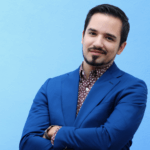 Jannik LaursenCEO & Founder of Develop Your Element Inc.
"Without having self awareness & empathy for others, it is hard to experience consistent gratitude.

True gratitude is being able to receive and value other people's well intended actions, even when those actions don't fulfill your personal expectations or ideals."

Jannik LaursenCEO & Founder of Develop Your Element Inc.
Previous
Next

Jannik Laursen is an entrepreneur and visionary of Danish and Mexican descent with a passion for Personal and Professional Development.

He has had the privilege of living in five countries and visiting over 30, as a result of which he has experienced the complexities of culture and society’s influence on human behaviour, as well as witnessed the universal aspects of humanity and the kinds of struggles we all face.

He realized that everywhere in the world, people are struggling with insecurities and fears, difficulties communicating with and relating to each other, and finding a balance between adapting to others and being true to themselves.

As the constant “new kid”, outsider, and foreigner wherever he lived, he also experienced bullying and social rejection, which — despite him being primarily extroverted — created a level of shyness and social insecurity that paralyzed him in some social and professional settings.

As a result of this he has pursued not only his own personal growth, but the creation and development of personal development techniques that are functional for people with varying contexts, goals, personalities, and life experiences.

Jannik’s passion is to empower people based on their unique abilities. Seeing the strengths and potential in people is at his core and his life is centered on unlocking that potential.

Coming from a mixed cultural background sparked a certain curiosity about people’s personalities and how they’re influenced by both internal and external factors. Furthermore, Jannik and his sister Itzel had significant differences in needs, instincts and personalities that they couldn’t dismiss as cultural.

As a result Jannik has pursued ongoing investigation into personality theory, its applications and its limitations, in order to create what is now known as Develop Your Element – a personal and professional development technique which helps people navigate their personalities, the strengths and weaknesses, and the internal and external factors that influence them.

All of this is with the goal of giving people the tools and information to bring out the best in themselves, and create more positive life experiences.

With over 10 years of experience in sales and business, Jannik has seen the ups and downs of how things can be done in the industry.

As a person with in-store, online, door-to-door and over the phone sales experience, he witnessed just how different sales trainings and management styles either brought out the best in him or discouraged him and sabotaged the whole sales team.

As a recruiter he discovered the strengths and pitfalls of different personality types in sales, which he has gone on to teach people in order to help them navigate their own ups and downs. Jannik has helped thousands of people around the world unlock their strengths and communicate more effectively in business and sales.

When you're getting true personal growth, you don't depend on a system to keep giving you the next "fix" of euphoria. You get the tools, you take them home, and you watch yourself grow with them.

Subcultures are great, but personal development shouldn't be an alternate social bubble that you escape to when your life doesn't work. The goal here is to enrich your real life, strengthen your existing relationships and help you develop positive new ones too.

Everyone needs different tools, different advice, different levels of social stimulus, different structure and organization. The focus is therefore on your unique needs and finding what works for you, instead of invalidating you and your needs by idolizing one single optimal route.

No Boxes or PERSONALITY TESTS

You are not limited to a single personality profile. You are a mix of all the types, with some dominating over others. The focus is a combined approach of helping you embrace what's most natural for you and and strengthen the traits that require more effort, to give you both comfort and agility.

Only you can define what’s most natural for you, easy for you, and what your goals and challenges are. The key here is that you get the tools, information and framework to figure those things out and what to do about them.

Explore how to recharge your internal battery based on the optimal activities, social stimulus, physical movement and organization for your unique mix of traits and instincts. Boost your energy levels to boost your results and quality of life.

To become the best version of you, you have to work on identifying and overcoming your insecurities - but this can be a scary and difficult process without guidance. Get the framework and tools you need to face and overcome insecurities without losing yourself in the process.

Learn how to interconnect your goals across different areas of your life, so that progress in one area doesn't cost you another. Learn how to stay focused and keep advancing when multiple priorities and goals require your attention.

SELF-RESPECT is about self awareness, trust and mature communication! #personaldevelopment #confidence

Open
SELF-RESPECT is about self awareness, trust and ma

SELF-RESPECT is about self awareness, trust and mature communication! #personaldevelopment #confidence ...

Confidence is not about acting tough. It's about being ready for anything. #confidence #socialdynamics #mindset

Open
Confidence is not about acting tough. It's about b

Confidence is not about acting tough. It's about being ready for anything. #confidence #socialdynamics #mindset ...


Error: API requests are being delayed for this account. New posts will not be retrieved.